Bretagne, west of France was the playground of the French XCC and XCO championships this week-end. The four riders of the Team were able to stand out and win 2 tricolor jerseys and climb the podium 4 times. We can say that they made us vibrate and knew how to take advantage of the fervor of the public, in an over-vitamined atmosphere! 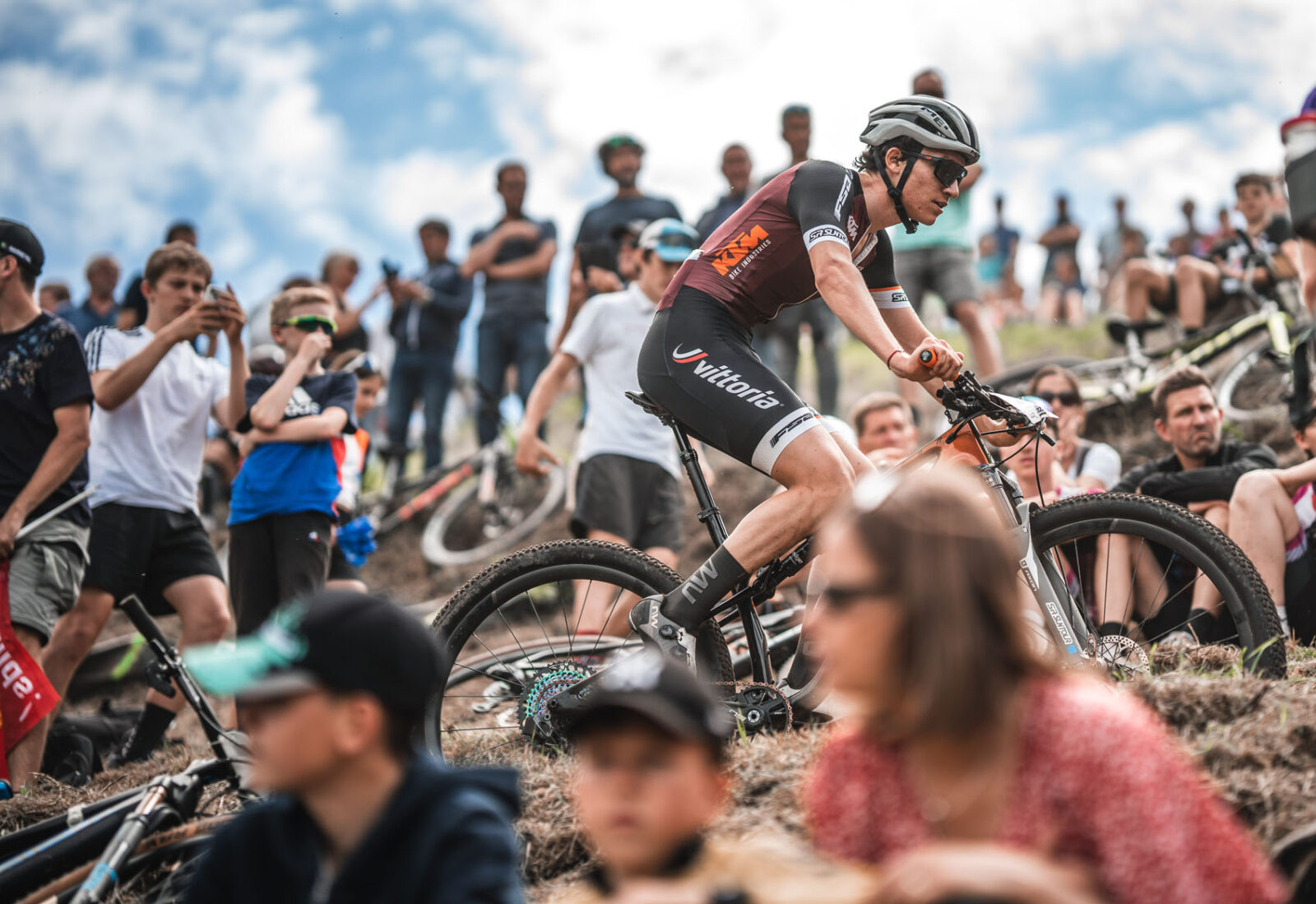 Under a beautiful sun Léna Gérault and Maxime Loret engage in the elite XCC and XCO races. Tatiana Tournut, for her part, is putting her tricolor jersey back into play, which she has already worn all year and finally Mathis Guay wants to show off her excellent feelings on this 5km course and 160m D+. The track is rather dry, with some technical and physical portions including the famous climb to the Col des Fougères. 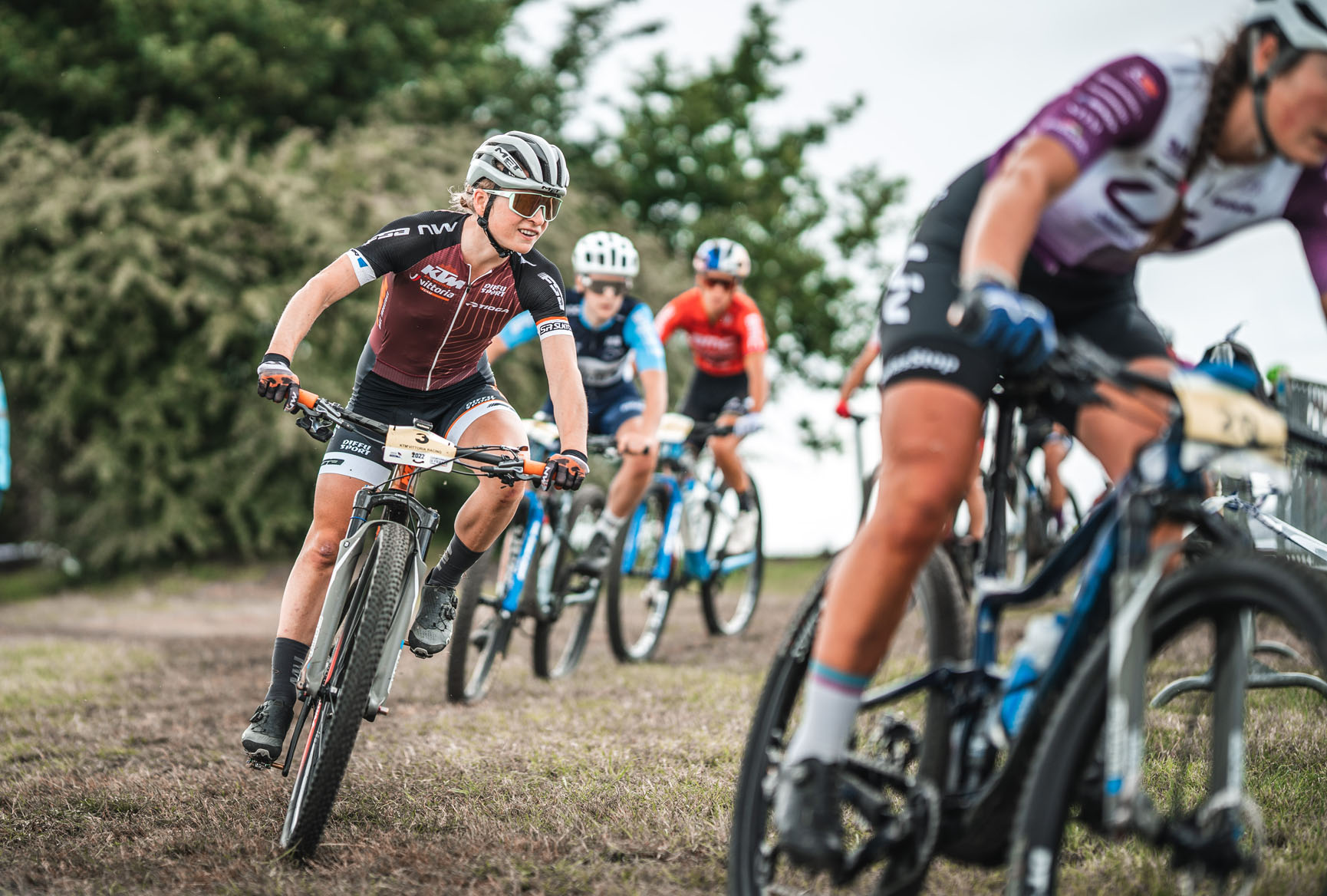 XCC : Start at 2:30 p.m. for a fast and dynamic race. The peloton remained together during the first laps until Pauline Ferrand-Prévot attacked. Léna manages to follow her wheel and they race in the lead until Hélène Cluzel returns to the group. In the woops Léna remains in second position and feels that she has good shape. Further on, Léna counters to try to outrun her breakaway companions. She starts the last lap in the lead, the final sprint promises to be thrilling and it is Pauline who ends up winning after a long straight. Léna started the French XCC championships very well by finishing in second place.

XCO : With her excellent sensations on the XCC and carried by her coronation in the French Marathon Championship, Léna wants to give everything to wear a second tricolor jersey. The other strong girls of the moment are also present, the battle is tough! Léna settles on the first line. The start is quick and the first group is formed with Loana Lecomte, Pauline Ferrand-Prévot, Line Burquier, Léna Gérault and Hélène Clauzel. Then the gaps widen quite quickly, accentuated by the passages of the Col des Fougères. Léna and Hélène fight a great battle for 4th place, which Léna wins. 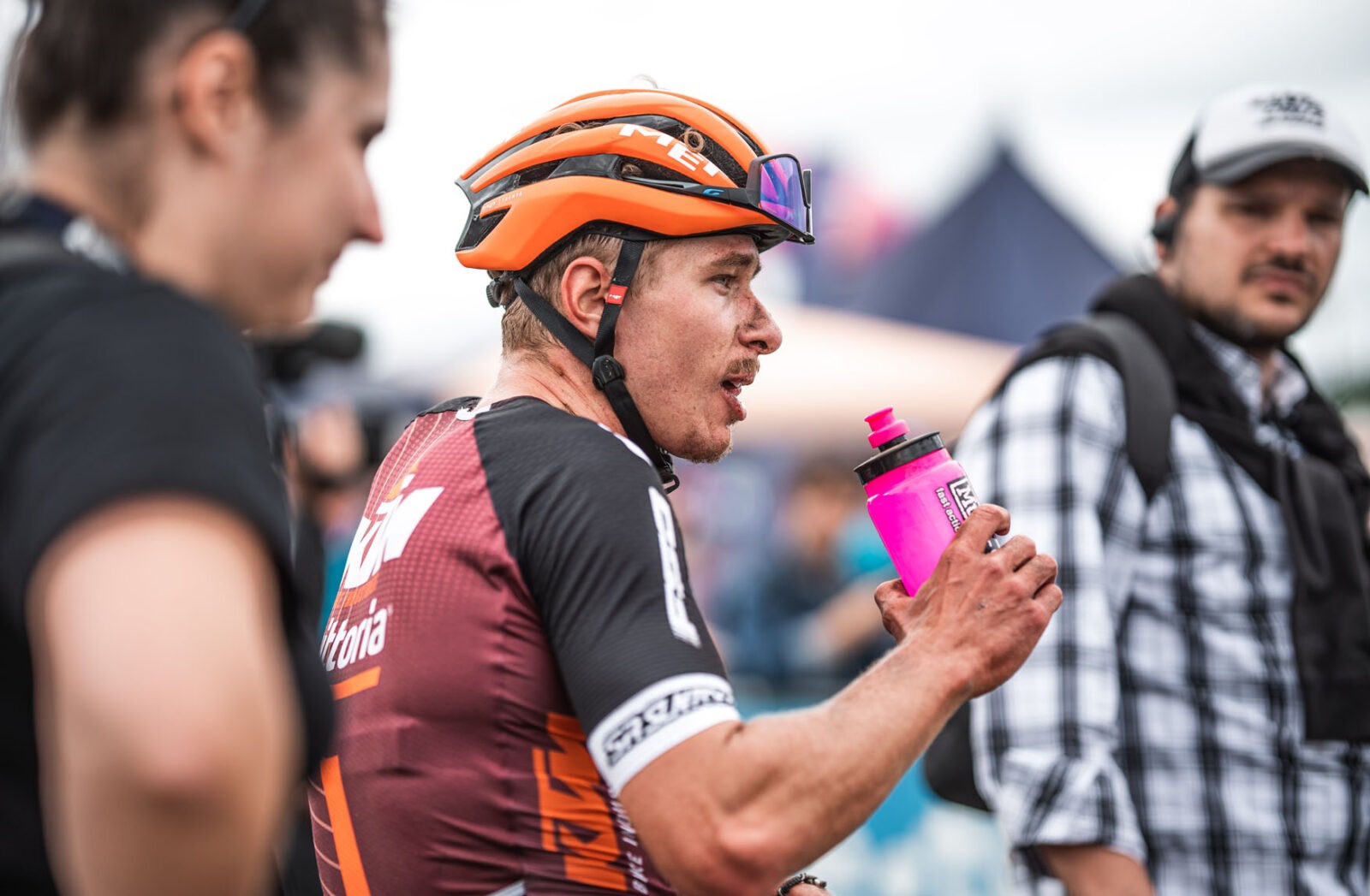 XCC : With rain, the men take the start of the XCC. The circuit borrows several stretches of low-rolling grass and is quite challenging even if the distance is short. The winner will not necessarily be the most technical but the strongest physically. They are going full force, Maxime is super well placed in second position and it is Joshua Dubau who takes the lead. The pace is very high and even causes significant breaks. Maxime remains focused on the second place he occupies, he manages the effort and the line to avoid overtaking. Over the laps, Maxime takes the lead, the changes are frequent, incessant, it keeps moving, restarting, attacking. Maxime is still in the first group of 5 riders with 2 laps to go. Always very well placed, we imagine that it is in the sprint that the win will be decided. He attacks the last lap in the lead, he fights a very good battle at the entrance to the pumptrack, blocks the way and it is in the sprint that Maxime Loret comes to win and offers the French XCC champion jersey to KTM Vittoria Team.

XCO : Following his performance on the XCC Maxime enters the scene on the XCO with an overflowing motivation. All the French gratin is here and confidence is there. He starts on the front row, on this 5km lap. The pace is fast from the start, Maxime is well placed in a first group that stands out. The atmosphere is incredible, the chainsaws of the public reason. Until halfway through the race, Maxime manages to stay in this group but little by little he feels that his legs are pulling and the effort seems more and more difficult. He clings to the leading riders but Titouan Carod and Jordan Sarrou accelerate again, breaks are done. Maxime limits the damage and manages to keep his 7th place until the end. 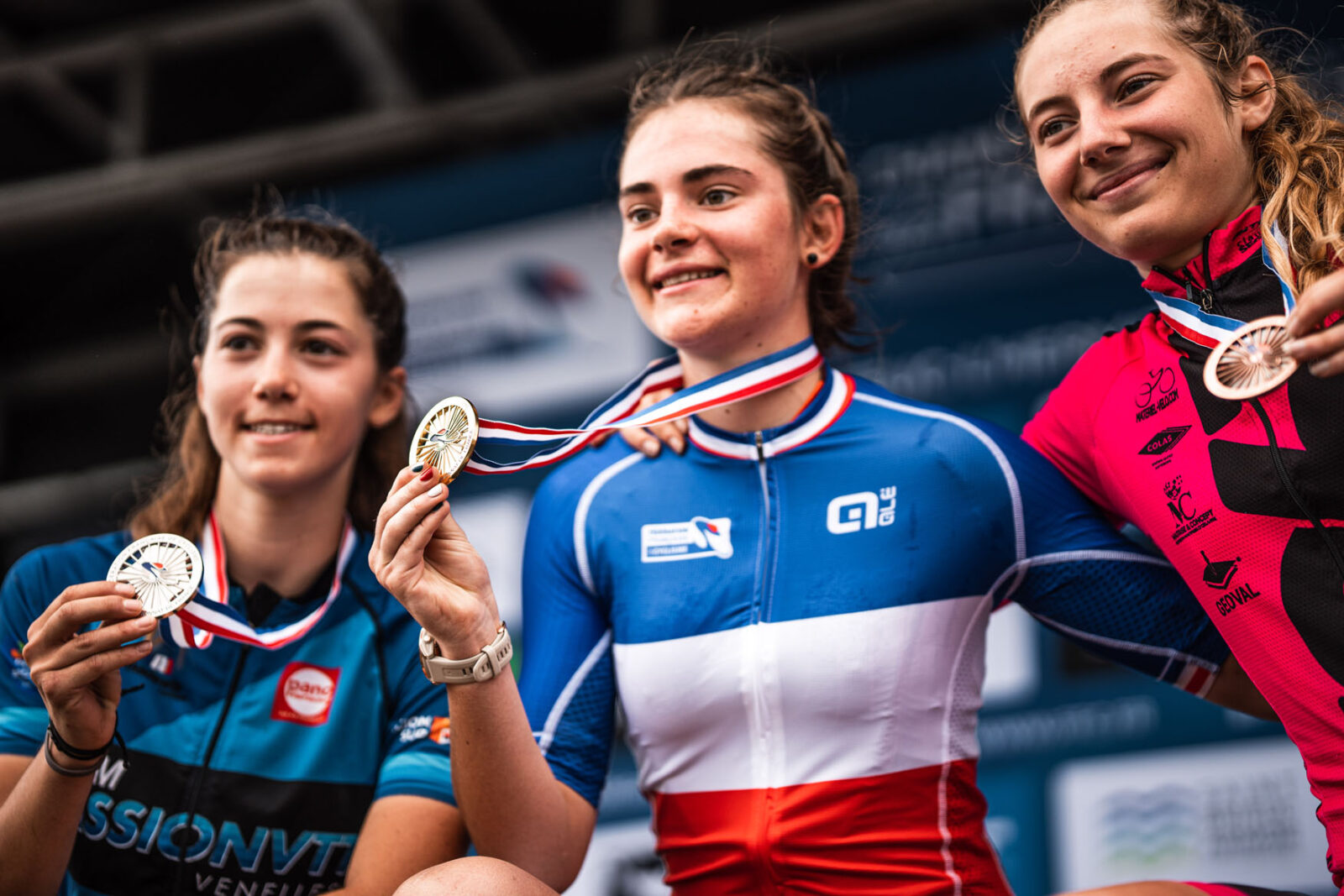 Tatiana Tournut is the favorite to her own estate. It always brings an extra dose of pressure. She sets up first on the starting line, riding her KTM Scarp. The weather is great despite a light Breton wind which blows more or less strongly depending on the portions. Tatiana likes to holeshot and take the lead, something she does in these championships. The race could not have started better. She feels that she is in really good shape, manages to put some gear in the Col des Fougères allowing her to distance her competitors quickly. It’s good for confidence. Tatiana is racing alone in the lead, comes to win and brings a new tricolor jersey to the KTM Vittoria Team.

Mathis guay, on the podium 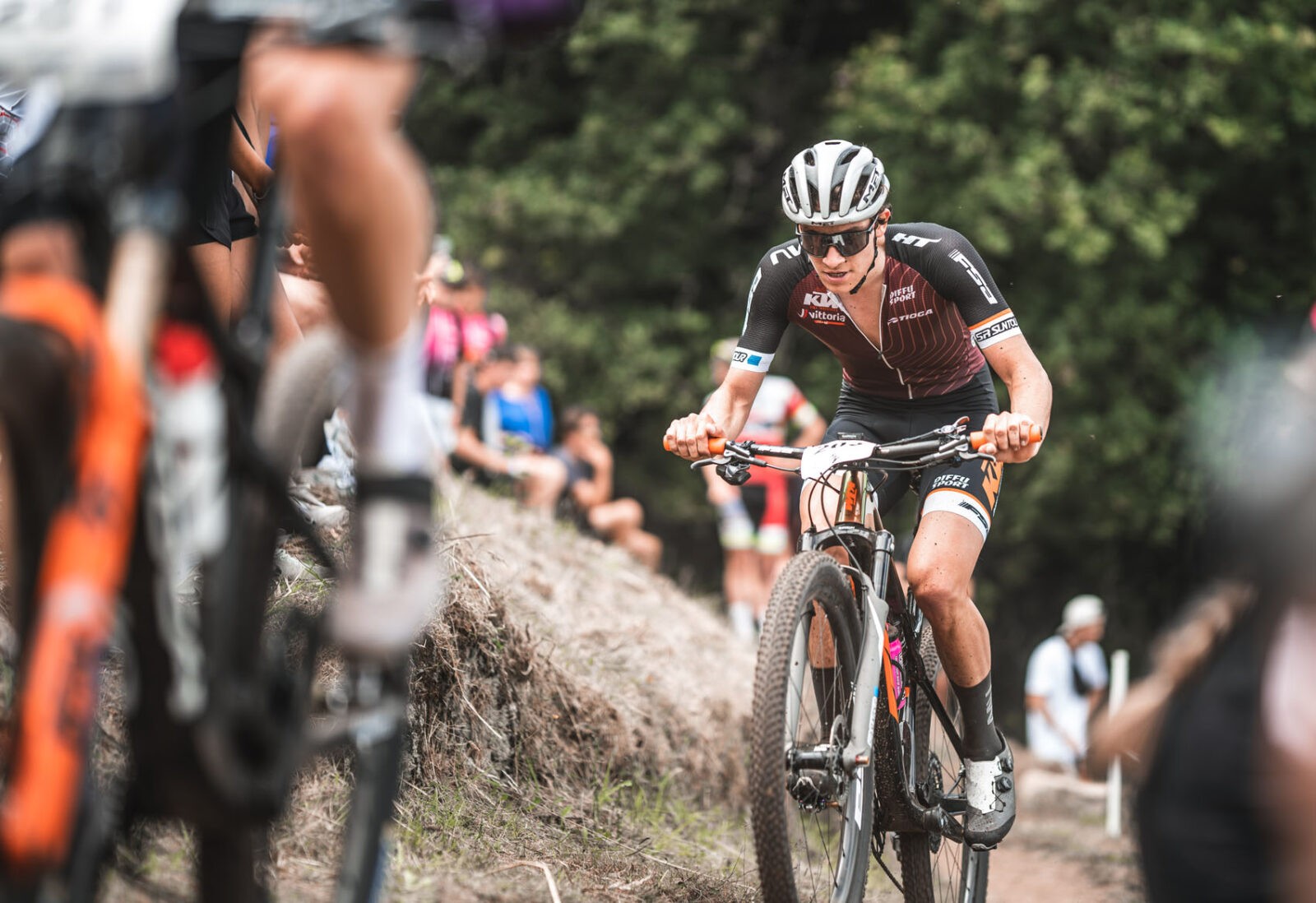 With the win of Tatiana Tournut in the previous race and the great sensations of the moment, Mathis wishes to make a mark on these French Championships and bring a new title to the Team. He too is on the front line, in the middle of the strong men with in particular Luca Martin and Mathis Azzaro. His start is successful and puts him in the best conditions to be at the front. The wind picks up, Mathis protects himself, stays in the wheels and from the first pass over the Col des Fougères, he is 3rd. He feels strong and knows he has everything he needs to get a good place. The laps follow one another, Mathis remains in the top three. It is between them that the battle is going on for the french jersey, Luca places a decisive attack and will succeed in winning. Mathis Guay finished in 3rd place less than a minute behind the winner. New podium for the Team! 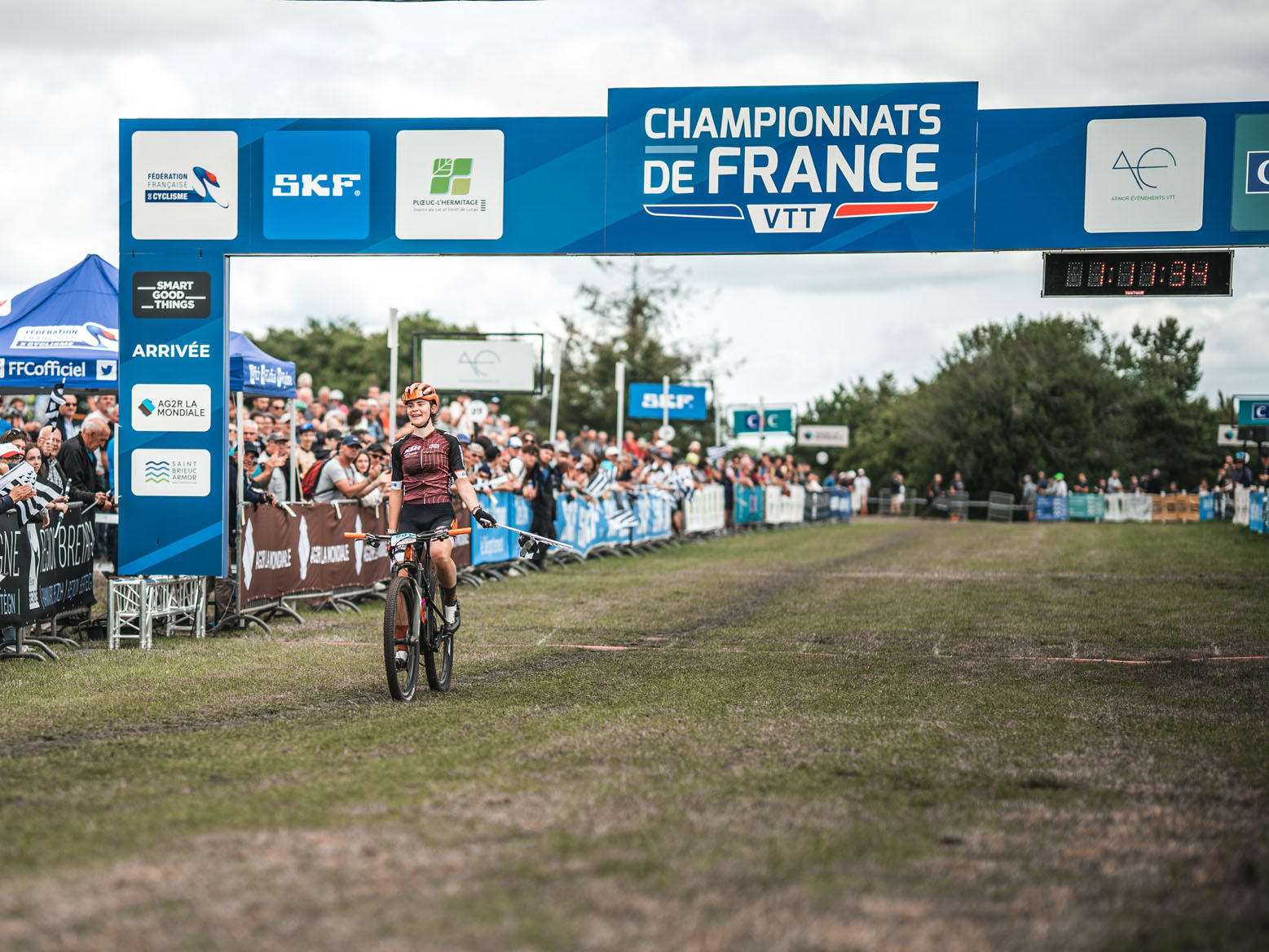 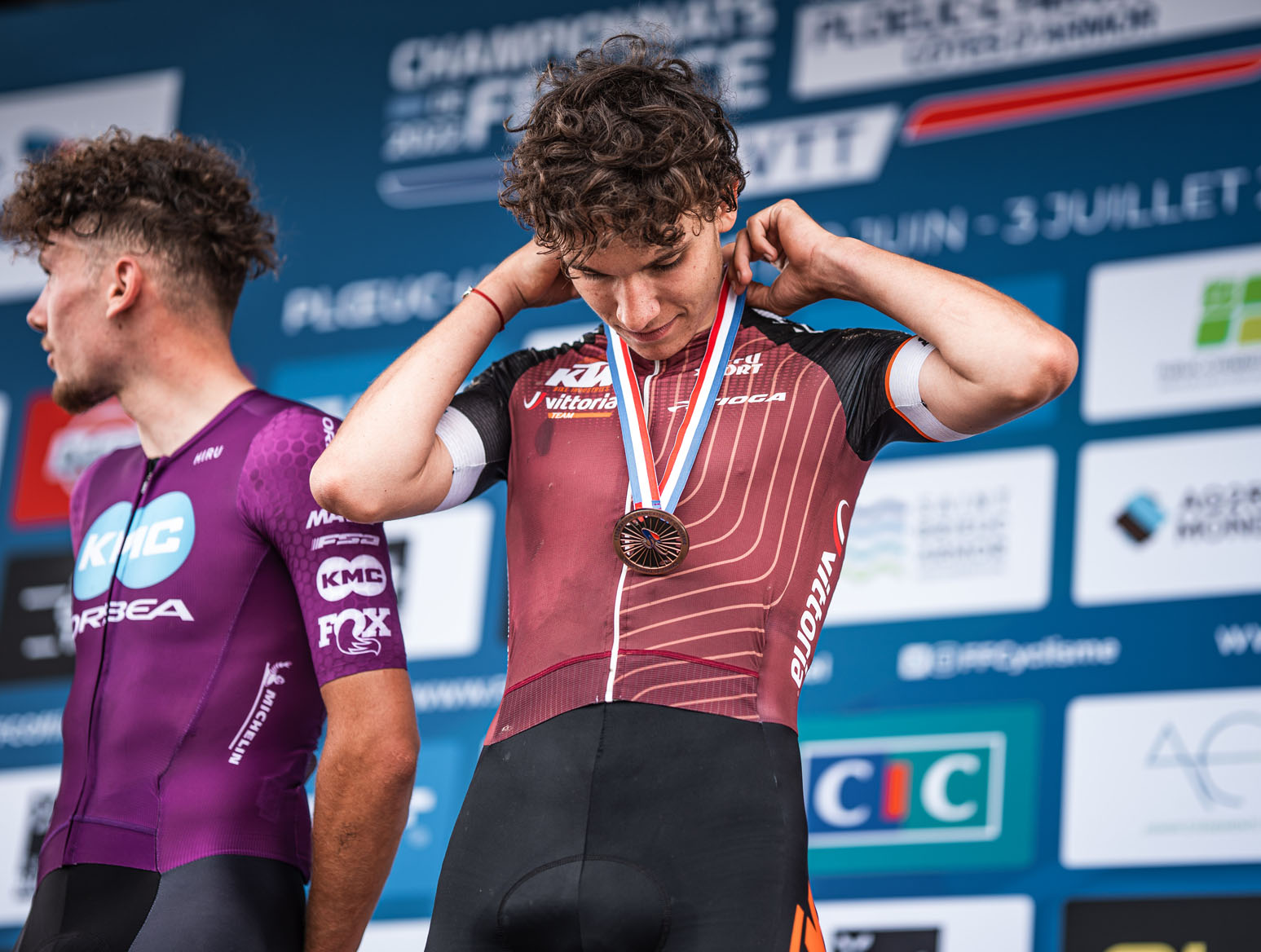 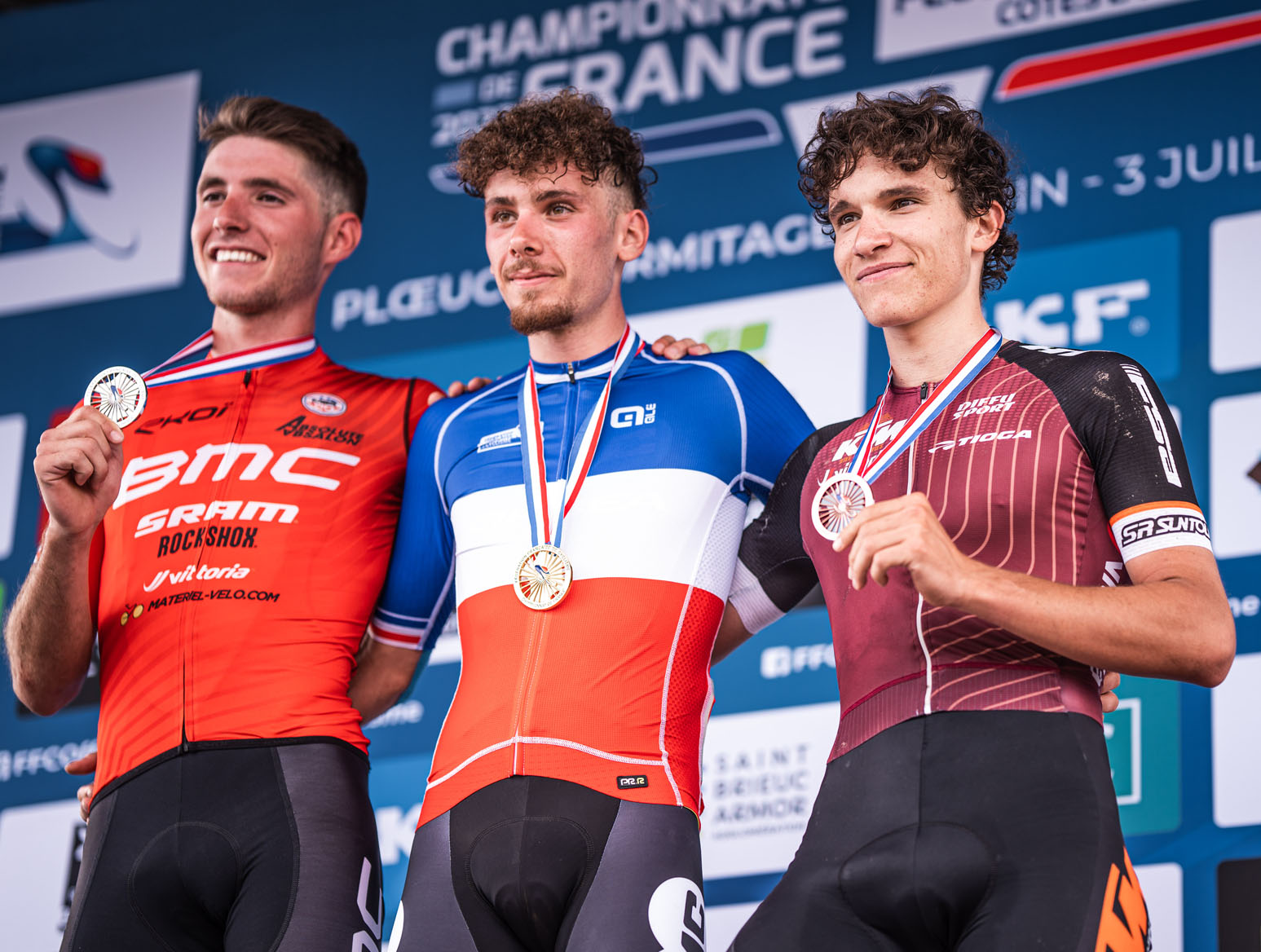 “The riders did incredible races, we were all behind them! Maxime and Tatiana offer the Team two additional French championship titles and Léna and Mathis very good places. For us, these are clearly successful championships, now on to the next round of the World Cup for a summer of madness.”